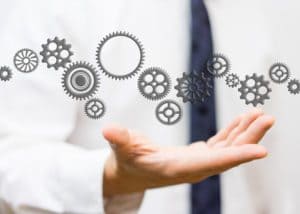 In IoT, the most important thing is the connectivity among objects. From a single constrained device to a whole range of cloud systems, IoT extends to a whole host of devices and systems—all connected by a set of protocols that allow devices and servers to talk to each other. Following are protocols of IoT explained.

Physical and Data Link Protocols for LPWAN
LPWAN is a low power long range wireless network in which battery powered IOT devices surrounded by wireless sensors are interconnected. Used for machine to machine communication, LPWAN have a coverage network greater than Wi-Fi but less than cellular technologies. There are many physical and data link protocols specified for LPWAN and some of them are as follows:
•Sigfox
•LTE M-1/ LTE- MTC
•LoRaWAN
•RPMA
•EC-GSM-IOT

Physical and Data Link Protocols: RFID and Mobile Standards
RFID based protocols include RFID, DASH7 and NFC. Also, many common mobile standards are evolving to accommodate IoT applications and these include: GPRS, GSM and CDMA.

Network Layer Protocols
Network layer is part of the infrastructure layer in IoT reference architecture. This layer is responsible for addressing and routing of data packets. Till now, IPv4 had been the standard protocol for network layer. However, since this protocol has a limited address space incapable of coping with the scalability of the IoT applications, a new IPv6 standard has been developed to accommodate address space sufficient to enable addressing the billions of IoT devices. There are other network layer protocols as well and the popular ones include the following:
•6LoWPAN
•6TiSCH
•6Lo
•IPv6 over Bluetooth Low Energy
•IPv6 over G.9959

Service Delivery Protocols
The layer has a prominent role in an IoT architecture. It is the service discovery or service management layer which differentiates an IoT network with that of typical internet network. The IoT devices need to connect and communicate with web or cloud based services and applications for IoT implementation.
There are some protocols designed to resolve host IP addresses rendering IoT services and applications. These protocols help identifying servers hosting IoT services by their namespaces and allow an IOT board to connect with one (Unicast) or group of servers (Multicast) over the network. Following are some popular service delivery protocols:

Application Layer Protocols
This layer lies above the service discovery layer. It is highest layer in the architecture extending from the client ends. It is the interface between the end devices and the network. This layer is implemented through a dedicated application at the device end.

Responsible for data formatting and presentation, the application layer is typically based on HTTP protocol. However, HTTP is not suitable in resource constrained environment because it is extremely heavyweight and thus incurs a large parsing overhead. For this reason, there are many alternate protocols that have been developed for IOT environments and they include:
•MQTT
•SMQTT
•CoAP
•DDS
•XMPP
•AMQP
•REST
•MQTT-SN
•STOMP
•SMCP
•SNMP
•LLAP
•SSI
•LWM2M
•M3DA
•XMPP-IOT
•ONS 2.0
•SOAP
•Websocket
•Reactive Streams
•HTTP/2
•JavaScript IOT